Through the Jerky 101 mini-video series, The Grill Dads, Mark Anderson and Ryan Fey, will use their signature humor and know-how to teach people all about America’s favorite meat snacks, while Chef’s Cut stars as the exemplary brand. Each episode will function as a “lesson” that will deconstruct the snack category, flavor profile and processes that come together to create the uniquely high quality snacks consumers get from Chef’s Cut. The series will be featured on Chef’s Cut’s website, YouTube channel and social media accounts – Instagram and Facebook – giving consumers real information in an entertaining, educational and authentic way. The videos will feature themes like sourcing, marinade ingredients and protein breakdown, as well as best practices and preparation methods.

“Going into this project, we had a good understanding of what it takes to make some great jerky – but Chef’s Cut brings the process to a whole new level,” said Ryan Fey of The Grill Dads. “This team has it dialed in, and Mark and I are committed to creating a worldwide Chef’s Cut Jerky shortage.”

Chef’s Cut premium jerky, sticks and biltong products are always chef-crafted in the USA with premium, US-sourced meat and unique marinades, spices and cooking processes for a superior snacking experience. More recently, Chef’s Cut launched the best tasting Zero Sugar Jerky in the category to complement its complete zero-sugar platform, which already included biltong and stick formats. The Zero Sugar line of meat snacks from Chef’s Cut offers bold, savory flavors that are keto-friendly and never compromise on taste, surpassing all expectations of what a zero-sugar meat snack can and should taste like.

“In the ever-cluttered digital landscape exacerbated by the pandemic, and with safe sampling and in-person activations still largely stalled, the Chef’s Cut team tasked itself with finding creative ways to authentically insert the brand into meaningful touchpoints with our target audience,” said Rusti Porter, Chief Marketing Officer of Chef’s Cut. “Between the dad jokes and the profound passion for food that comes naturally to Mark and Fey, we knew we found a pair of partners that are a true fit with the brand. We’re beyond excited to take jerky fans into the classroom (quite literally) for a little jerky education that is compelling, entertaining and simply fun.”

Chef’s Cut is a brand that has built a roster of products including jerky, meat sticks, biltong and their newest line of Zero Sugar products that are made with the finest real ingredients and premium cuts of US-sourced steak. The products are available online at www.chefscutrealjerky.com, on Amazon and on the shelves of select Kroger, Safeway, drug stores and conventional grocers nationwide.

About Chef’s Cut Real Jerky
Since its founding in 2009, Chef’s Cut Real Jerky Co.™ has evolved into the leading premium meat snack brand of choice for the most discerning meat-lovers. Chef’s Cut set out to create a steakhouse experience in a snack, evident in their use of only premium, US-sourced meat cuts, chef-crafted marinades and chef-preferred cooking processes. Chef’s Cut’s current product line includes jerky, meat sticks and biltong. For more information on Chef’s Cut and their range of products, please visit www.chefscutrealjerky.com.

About The Grill Dads
The Grill Dads are Mark Anderson and Ryan Fey, also known as Mark and Fey. Best friends for more than 20 years, the two worked by day as advertising executives when they started cooking together for dinner parties and casual barbecues. As the hungry crowds grew, Mark and Fey were able to turn their passion for making crave-worthy weekend eats into appearances as guest executive chefs planning sold-out pop-up menus at Los Angeles restaurants.

Mark and Fey won Food Network‘s Guy’s Big Project, an original competition reality series created and hosted by Guy Fieri, which led to the launch of their own Food Network series. Leaning into their roles as fathers to young children, Mark and Fey became known as the Grill Dads, and the Grill Dads Outrageous, Super Awesome, Totally Tasty Food Extravaganza Show was born. 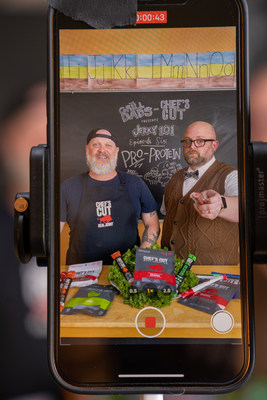 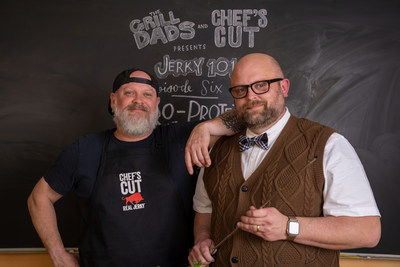