STOCKHOLM & NEW YORK–(BUSINESS WIRE)–Soundtrap, a part of Spotify, today announced that its Soundtrap for Storytellers transcription service will now be available in French, Spanish, German, Brazilian Portuguese, Portuguese and Swedish, enabling millions of users worldwide to create quality podcasts with this easy-to-use solution. 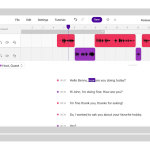 Launched in May this year, Soundtrap for Storytellers is a comprehensive podcast creation solution that offers all of the following features in the same service: recording, remote multi-track interviewing with video chat, smart transcribing and editing of the spoken-word audio file as a text document, full audio production capabilities, the publishing of its transcript to optimize SEO, and the publishing of the podcast to Spotify.

The interactive transcript and editing studio has proven to be extremely popular – it saves hours of time by enabling users to transcribe the spoken word live and edit the audio file as they would in a text document, eliminating the need to type out text or listen to the podcast over and over again. Initially only available in English, now anyone who speaks French, Spanish, German, Brazilian Portuguese, Portuguese or Swedish will use this transcribing solution in their mother tongue.

Equipped with a wide range of intuitive features, Soundtrap for Storytellers allows podcasters to focus on the art of storytelling by significantly reducing the time and investment typically needed to make podcasts sound professional. The full suite of services can be accessed via desktop, and a select set of recording and editing features is available on iOS and Android. Additional tools:

Collaborate and Remotely Interview Guests: Soundtrap for Storytellers enables podcasters to seamlessly collaborate with others from anywhere around the world. The platform is cloud-based and allows multiple people to talk, record (on separate tracks) and work on the same podcast by sending a link to join the session remotely.

Sound Effects: Create your own jingle and complete your production with sound design using Soundtrap’s built-in instruments and loops, and access an enormous sound library without having to leave the studio.

Storytellers was developed specifically for podcasters looking to create professional-sounding podcasts from a single platform. There’s a library of built-in musical loops and sound effects to access, or users can easily drag and drop any audio directly into the Soundtrap window. Another of its built-in tools lets users manage their podcast episodes and publish them directly to Spotify.

“We built Soundtrap for Storytellers around solving some of the biggest pain points for podcasters, with an aim of providing a streamlined platform that addresses every element of the podcast creation process. Adding six more languages to the platform’s capability gives millions of new users the chance to use the smart transcript feature in their own language,” said Per Emanuelsson, managing director of Soundtrap at Spotify.

Pricing for Soundtrap for Storytellers, begins at $14.99/month and an annual plan is available starting at $11.99/month. French, Spanish, German and Swedish are available immediately. The transcription service in Brazilian Portuguese and Portuguese will be available in December.

ABOUT SOUNDTRAP: Soundtrap is the first cloud-based audio recording platform to work across all operating systems, enabling users to co-create music and podcasts anywhere in the world. The company is headquartered in Stockholm, Sweden. Soundtrap provides an easy-to-use music and audio creation platform for all levels of musical interest and abilities and is being used by the K-12 through higher-education markets. On December 2017, Soundtrap was acquired by Spotify. For more information, visit https://www.soundtrap.com/.

Maxar Technologies Appoints Gilman Louie to its Board of Directors

Maxar Technologies Appoints Gilman Louie to its Board of Directors