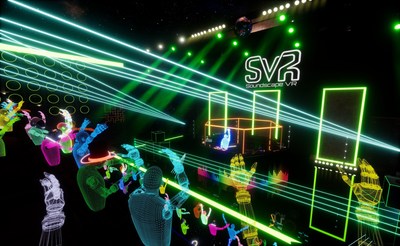 “Artist Link represents a massive opportunity to change the way live entertainment is produced and consumed,” said creator Eric Alexander, “With the capability to produce live shows directly from your home, Artist Link eliminates the need for costly infrastructure normally associated with presenting a concert experience or tour.” Replicating the concert experience only formulates part of the foundation in Artist Link – “We’ve completely rethought the audience perspective. Attendees are no longer limited to just watching their favorite artist perform, now you can fly above the stage, paint the sky with light, even shoot fireworks from the tips of your fingers!”

Artist Link is the latest history-making marvel by Groove Science Studios, adding to a long list of pioneering achievements in the VR arts space since 2014. “We’re very excited to cross this milestone in our development roadmap,” said Marketing Director Benjamin Ferguson, “This is the culmination of nearly seven year’s worth of work. We’ve grown the platform to include five large-scale, audio-reactive worlds, a mixed reality stage that’s been featured everywhere from the playa of Burning Man to the swamps of the Hulaween music festival, and now our brand-new broadcast portal, Artist Link. This opens an entirely new frontier for artists everywhere.”

Performing in Soundscape VR is unlike anything anyone has experienced in the real world. Eliminate the laws of physics from the equation and you’ve only begun to peel back the layers of potential in this exciting new realm. With highly detailed venues that are reactive to your presence, immersive effects that are only possible in the digital world, and the reality of experiencing it with your friends and your favorite music, regardless of location, makes Soundscape VR truly unique in its offerings for fans and creators of music. “It’s not just about capturing or recreating the experience, but the emotion that comes of it. It’s all there in Soundscape and it’s very real in way that a traditional 2D stream just can’t compete with.”

For the world debut of Artist Link, Silica Sol (the musical alter ego of the creator of SVR) will be performing a special mix dedicated to the artists who have inspired Soundscape for over seven years and counting.  This live, mixed reality show is entirely self-produced with zero off-screen crew, highlighting the mind-blowing decentralized capabilities of the Soundscape VR platform. While Artist Link is designed to be experienced with the superior technology of virtual reality, traditional streaming methods are made available for viewers who don’t have access to VR equipment.

For more information about upcoming Artist Link performances in virtual reality, users are encouraged to follow the company on social media and visit their website where an announcement about the next performance will be revealed soon. Artists who are ready to hit the stage in the world’s most advanced venues are encouraged to sign-up on the waiting list at their website, www.soundscapeuniverse.com, to reserve their spot and to be the first to know what’s coming next!

About Groove Science Studios:
Since 2014, Groove Science Studios (GSS) has been the leader of VR music technology in every reality with the introduction of the Soundscape Universe, a collection of virtual, mixed, and augmented reality software enabling a new generation of music and art. The Soundscape Universe includes: Soundscape VR: The groundbreaking immersive music platform that redefines how music is experienced and enjoyed, by both artists and audiences alike. Artist Link: the ultimate creator portal allowing for the broadcast of live content into any of the worlds in Soundscape VR. SVR Live: A mixed reality festival stage that combines the best aspects of live performances with a truly immersive VR experience onsite at festivals around the country like Burning Man, Hulaween, and Sonic Bloom. Sound(E)scape: A repurposing of the Soundscape VR platform aimed directly at the therapeutic benefits of VR exposure therapy (VRET) when treating anxiety disorders and psychiatric illnesses like PTSD, anxiety, specific phobia, schizophrenia, autism, dementia, and heavy stress.

About Soundscape VR:
As a groundbreaking music, arts, and gaming VR platform enabling a new generation of live concerts, music experience, and sound visualization; Soundscape VR (SVR) has paved the way for the next technological expansion of the music industry for over 7 years and counting. Friends across the globe can listen, fly, paint, explore, watch, dance, compete, and more; together in a sonic-visual adventure functioning as a 24/7 music festival. SVR’s Sonic AI allows the software to visualize any genre of music automatically, deeply integrating the music into the mindbending audio-reactive environments. Engineered by an independent collective of artists, musicians, and developers to be the premier destination for musical and artistic virtual reality content, SVR is regarded as one of the most immersive and technically impressive virtual reality apps in the world. With over 60,000 users comprising the Soundscape community, Soundscape VR is featured on the Oculus Home and Steam platforms for free. Soundscape VR is part of the Soundscape Universe, a collection of virtual, mixed, and augmented reality software enabling a new generation of music and art. For more information please connect on Facebook, Instagram or visit https://www.soundscapeuniverse.com 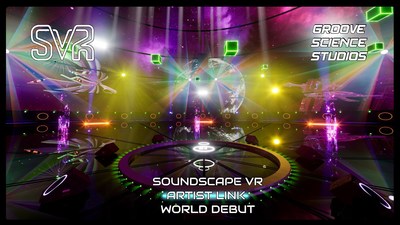